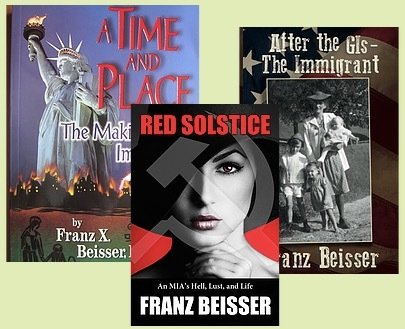 One Man, One Woman... Drafted in 1943 by a desperate Third Reich, Franz Brunner is captured by Stalin's army and carted off to a Soviet gulag. There, he battles harsh labor, starvation, bitter cold, and depression. Only the hope of seeing his wife and children again keeps him alive. Gifted with an inventive spirit, he earns a reputation as the go-to-fix-it guy. He also grabs the attention of his captors and their ace interrogator... Lana is singularly beautiful and knows how to leverage her feminine appeal to obtain that most valuable commodity - information. When she is assigned to investigate Franz Brunner, she discovers the embodiment of a life unsuppressed and free and unexpectedly finds a man to her liking. The chemistry between Franz and Lana is unmistakable, and puts each of them into a difficult situation. Should Franz remain true to a wife and family who think he is dead? Should Lana cast off the rigid protocol of the KGB and give in to her desires?

A TIME AND PLACE - An Autobiography With Photos And Drawings

The book is made up of 130 short stories and anecdotes that span the years from war torn Germany 1943 through postwar occupied Germany 1955, as well as the momentous anxieties experienced during the first two years in the New World.

The events described in this book are what molded the mind of the author during his formative years and made him part of America's strength: its immigrants.

AFTER THE GI's - THE IMMIGRANT An Autobiography

After the GI's - The Immigrant is a two-book expanded version of A Time and Place, The Making of an Immigrant.

The books are a collection of short stories about the struggles and joys of a boy and his family. It covers the period of post WWII Germany and reveals the challenges experienced as an American immigrant.

The heartwarming stories from more than 65 years ago reveal a time of simplicity not only in Germany, but also in the USA. The author weaves the stark reality into a meaningful and rewarding experience.

A master storyteller, Beisser effortlessly connects the reader to how an ordinary childhood shaped and helped him adjust to the dramatic changes experienced as a teen immigrating to America.

One, Two or Three books will be shipped at the same cost

Save this product for later
Display prices in: USD